If there is one thing that has entertained us for the past many years, then it has to be a deck of cards with black and red cards. Card games have always fascinated us and brought us together for an amazing game time.

One of the most popular card games, not only in India but across the world, is rummy. The game has a rich history and the origins of this game date back to a couple of centuries ago. Rummy has evolved over the years and has numerous variants present in various counties; at the core, this game is all about melding the cards. The players need to meld the cards in the form of sets and sequences by drawing or discarding them.

After years of entertaining people across the globe, the rummy game has reached online is a massive hit. This is mainly because of the convenience and availability that the online rummy game offers.

A standard rummy deck consists of 52 cards plus 2 printed. The 52 cards are divided into four suites, spades, diamond, hearts, and clubs. Each suit has 13 cards, A-2-3-4-5-6-7-8-9-10-J-Q-K. The two suits, diamonds and hearts are red in colour, while the spades and clubs are black in colour. So, there are a total of 26 red cards and 26 black cards in a standard deck. While why only these two colours are a mystery to many, keep reading this piece of article to get all answers to your questions.

No doubt that card games have a rich history. We can go back to as early as 868 AD, where it is believed that the first card game was played by Princess Tong Chang during the Tang Dynasty. This research is backed by many books and manuscripts. It is also widely believed that the playing cards were printed during the reign of Tang Dynasty. Card games became immensely popular in the Asian continent during the 11th century.

In European countries, playing cards became a massive source of entertainment in the 14th century. Back then, the deck that resembled Mamluk deck (which was popular in Egypt) had four different suites. The different suits were cups, polo sticks, swords, and coins.

The traditional Latin suites in Germany and Italy were replaced by bells, leaves, acorns, and hearts in the 13th century. The French suits (hearts, tiles, clovers, and pikes) were formed in 1480 which were a combination of Latin and German suit pictures.

To avoid such confusions, several systems were in place. One such system was were the four suits were allotted four different colours, so that they can be identified easily. For example, one system uses green for clubs, black for spades, blue for diamonds, and red for hearts. These four-coloured decks, also known as no-revoke decks, were meticulously designed for trick-tracking games like whist, jass, and bridge. These four-coloured suit cards were developed in the early 1900s for games such as poker and bridge. 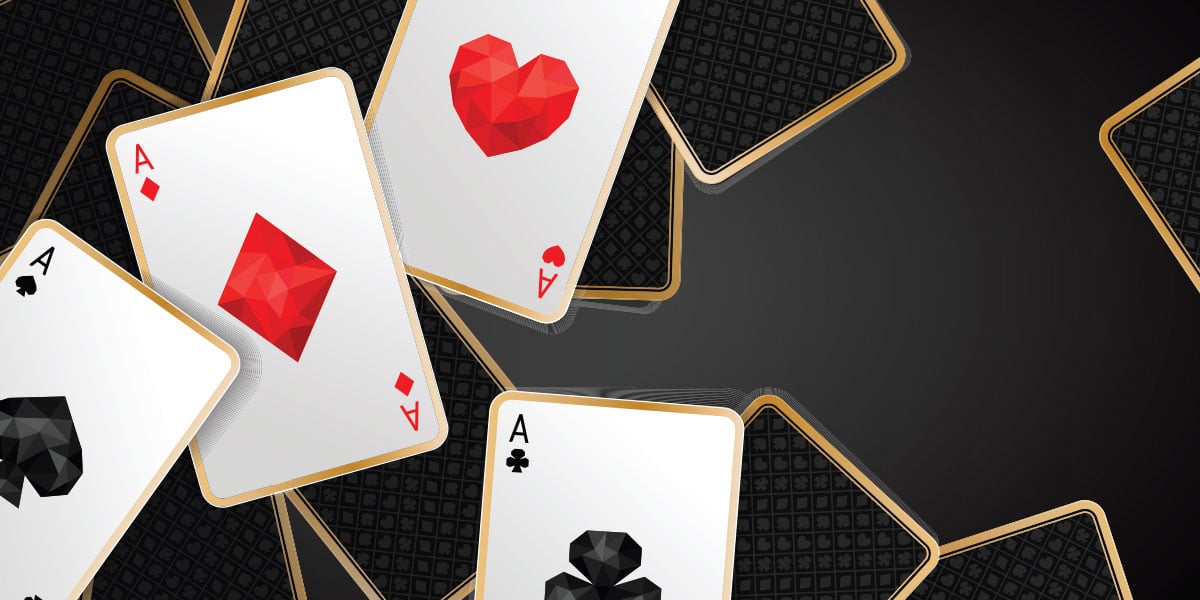 One of the main reasons why the modern-day cards are inked in black and red is that the black and red inks are easily accessible and available at the cheapest rate, as opposed to blue and green inks.

Some theories were also based on the fact that the red colour looks prominent on the white paper. The blue and green inks were expensive mainly because of the high cost of copper compounds required to prepare them. Plus, they were not oil soluble. Few theories also suggest that the black and red colours are a symbol of night and day.

Irrespective of the colour of playing cards, playing card games will always give us a gaming high like no other. Among all the card games that are available, rummy tops the list when it comes to the most popular card game around the globe.

The First Games app powered by Paytm is a place where you can play an array of online rummy games. Here you can join the rummy fun with millions of players across the country. The game is available to play 24*7, so you can elevate your online rummy skills anytime you want. You can try your hands at deals rummy, points rummy, and pool rummy. Plus, depending on your expertise, you can go for practice games, cash games, and tournaments.

If you are new to the game and want to know how to play rummy, you can play practice games first. The app is 100% secure and has instant withdrawals too. Also, you have a 24*7 customer support team that will help you if you get stuck at any point.

Rummy vs. Poker: A Comparison of the Two Most Played Card Games

Rummy Game Terminology: All you need to know about online rummy glossary

Most Wickets In T20 World Cup

Who Is The Fastest Bowler In India Right Now (2023)