Gujarat will be keen to make an impression in their maiden season in the Indian T20 League. The franchise had secured the services of Rashid Khan, Hardik Pandya, and Shubman Gill before the mega auction. Hardik is appointed as captain, while head coach Ashish Nehra and his support staff roped in Mohammed Shami, Lockie Ferguson, David Miller, Rahul Tewatia, Vijay Shankar, Matthew Wade, Alzarri Joseph, etc.

The iconic Wankhede Stadium will host Gujarat’s first-ever match in the Indian T20 League. They square off against fellow debutants Lucknow on March 28. Gujarat, who will play twice against Bangalore, Chennai, Hyderabad, Lucknow, and Punjab, conclude their league stage campaign on May 19. 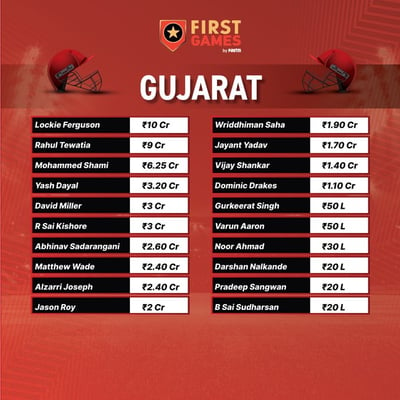 Which is the best fantasy cricket app?

5 Reasons why you Should Play Fantasy Cricket

Rummy vs. Poker: A Comparison of the Two Most Played Card Games

What is Razz Poker? An absolute guide on how to play razz