With just three wins in 2021, Hyderabad endured one of their most disappointing campaigns in the Indian T20 League last season. The Hyderabad faithful were left even more frustrated when David Warner and the franchise parted ways. The franchise retained only Kane Williamson and uncapped domestic players Abdul Samad and Umran Malik. In the mega auction, Hyderabad splashed ₹10.75 crore for Nicholas Pooran and re-signed Abhishek Sharma, Bhuvneshwar Kumar, and T Natarajan. Washington Sundar, South African duo Aiden Markram and Marco Jansen, Glenn Phillips, etc., were the other key signings.

Hyderabad, who will play twice against Bangalore, Chennai, Gujarat, Kolkata, and Punjab this season, take on Rajasthan in their tournament opener on March 29. DY Patil Stadium will host four of their opening six matches. They have testing fixtures in May as the 2016 champions take on Chennai, Delhi, Bangalore, Kolkata, Mumbai, and Punjab, respectively. 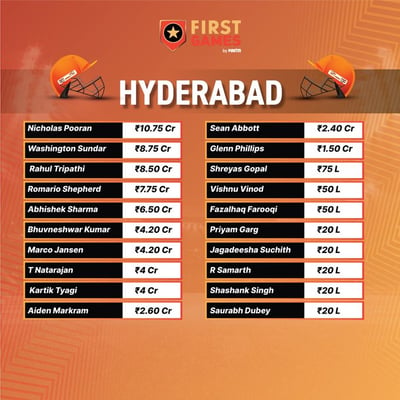