With a new captain at the helm and the arrival of a few experienced players, Bangalore will be hoping to lift its first-ever Indian T20 League trophy. Bangalore, who retained V Kohlii, Glenn Maxwell, and Mohammed Siraj, brought back Harshal Patel, Wanindu Hasaranga, and Shahbaz Ahmed during the mega auction. The franchise also roped in Faf du Plessis, who scored 633 runs last season, Josh Hazlewood, David Willey, etc.

Bangalore’s quest for a maiden title will begin against Punjab on March 27 at DY Patil Stadium. The Bengaluru-based franchise will play Chennai, Hyderabad, Gujarat, Punjab, and Rajasthan twice this season. They have tricky fixtures in April as the Du Plessis-led side square off against Mumbai, Chennai, and Delhi in the space of seven days. 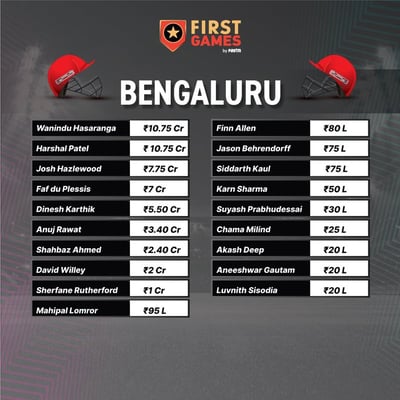