Mumbai will be desperate to bounce back after failing to reach the playoffs of the Indian T20 League last season. The record five-time winners, who have never finished outside the top four in successive seasons since 2009, managed to retain R Sharma, Kieron Pollard, Jasprit Bumrah, and Suryakumar Yadav. Meanwhile, they bought Ishan Kishan for a record fee and secured the services of Jofra Archer, Jaydev Unadkat, Tymal Mills, Daniel Sams, etc., in the mega auction.

At Brabourne Stadium, Mumbai take on Delhi in their opening game on March 27 at 3:30 PM. They will play two games against Chennai, Delhi, Lucknow, Kolkata, and Rajasthan. The franchise will end its league stage campaign against Delhi on May 21. Wankhede Stadium will host Mumbai’s last three league stage fixtures. 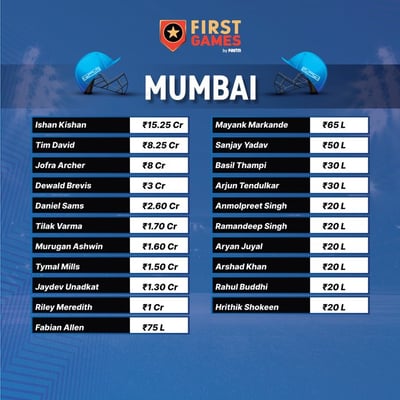