Trending Now
Top Smart Ways to Overcome a Gamer's Block
Why is Points Rummy India's most loved Online Rummy Version?
How to join Rummy Tournaments on First Games?
Top Smart Mantras of a Successful Rummy Player
Top reasons why Indians love Online Games
Top Factors that make First Games the best Rummy App
Top 5 Reasons why you should play Rummy at least once in your Lifetime
Top 5 Signs that prove Rummy is a Perfect Game for You
Brilliant 5 Strategies to Rule the Rummy Table Like a King
Top 5 Must-Have Apps to Download in Your Smartphone

Rajasthan will be desperate to have an impressive Indian T20 League 2022 campaign after failing to make the playoffs in the last three seasons. The inaugural winners revamped their squad in the mega auction, roping in prolific opening batter Devdutt Padikkal, spinners Ravichandran Ashwin and Yuzvendra Chahal, and New Zealand trio of Trent Boult, James Neesham, and Daryl Mitchell. England international Jos Buttler, skipper Sanju Samson, and Yashasvi Jaiswal were the three players retained by the franchise.

The Jaipur-based franchise face a stern challenge early in the season as they take on Hyderabad, Mumbai, and Bangalore, respectively, in their first three matches. Also, Rajasthan will play two matches against Bangalore, Delhi, Kolkata, Lucknow, and Mumbai. They conclude their league stage against Chennai on May 20. 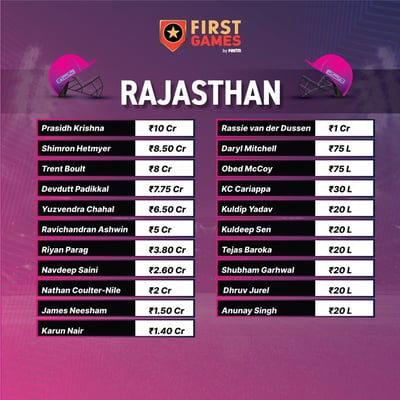