Kolkata are the third most successful franchise in the history of the Indian T20 League. The two-time winners, who made a remarkable turnaround last season, will be captained by Shreyas Iyer in the 15th edition. He was roped in for ₹12.25 crore by Kolkata in the mega auction. They also bought Nitish Rana, Sam Billings, Tim Southee, Mohammad Nabi, Ajinkya Rahane, etc. Kolkata splashed ₹34 crore to retain the services of West Indies all-rounders Sunil Narine and Andre Russell, mystery spinner Varun Chakravarthy, and all-rounder Venkatesh Iyer.

Delhi, Hyderabad, Lucknow, Mumbai, and Rajasthan are the five franchises against whom Kolkata will play two matches this season. In their tournament opener, Kolkata squares off against Chennai at Wankhede Stadium on March 26. The franchise will face Bangalore and Mumbai on March 30 and April 6, respectively. 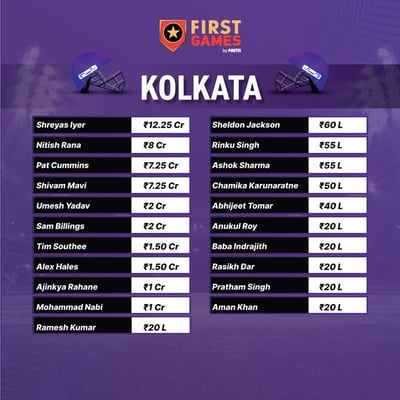